Theatre Review: Nothing could warm the cockles of one’s heart more

The Far Off Hills: a light-hearted Irish comedy that warms up winter evenings By: Sean Hillen Examiner.com 15/12/14 Nothing could warm the cockles of one’s heart more on such miserable wet winter evenings as Ireland is presently enduring than the utterly delightful theatrical jewel ‘The Far Off Hills’ directed by Mikel Murfi. This good, old-fashioned comedy written by Lennox Robinson in the 1920s, now on national tour, was staged this past weekend at An Grianan… Read More

By Emer O’Kelly Sunday Independent 08/12/2014 Why has Lennox Robinson been so neglected and under-rated by Irish theatre over the years; apart from his being Protestant, neurotic, and a bit spiteful, that is? Those personal qualities didn’t make him unique among playwrights and directors in Ireland,  or within the Abbey. But his writing talent glowed, and came damn close to being unique in its wry, understated observance of small-town and rural Irish society… Read More

Irish Independent – Saturday 07/12/2014 Lennox Robinson is barely remembered now as the author of a series of comic capers that used to be staples of the Abbey repertoire: one of these, The Far Off Hills, is touring till December 20 in a production directed by Mikel Murfi, and likely to be hilarious. (It’s at the Backstage Theatre in Longford tonight. See www.nomadtheatrenetwork.ie.) But Robinson’s career with the Abbey was quite the… Read More

RTE TEN Guide To The Far Off Hills 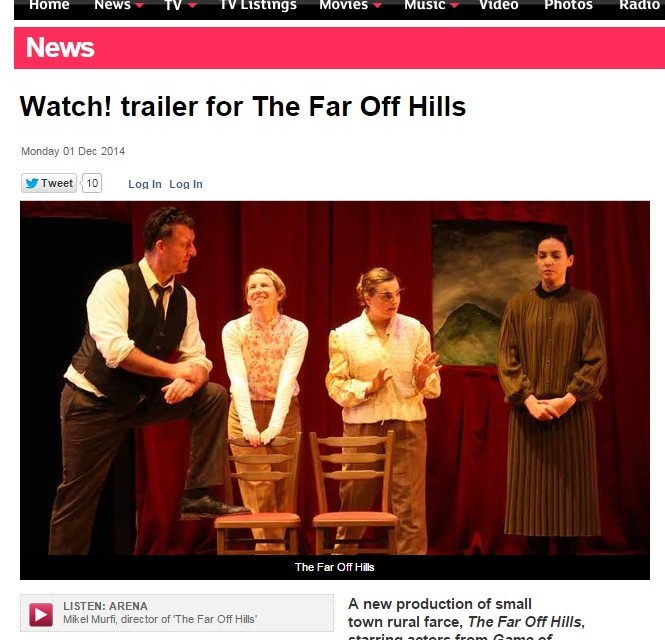